What is E Way Bill ?How to Make – Registration

E Way Bill Registration is mandatory now a day for the GST FILE. A New way bill is a receipt or document issued by a carrier giving details and instructions relating to the shipment of a consignment of goods and the details include name of consignor, consignee, the point of origin of the consignment, its destination, and route.

E Way Bill is Normally a compliance mechanism where by way of a digital interface the person causing the movement of goods uploads the relevant information prior to the commencement of movement of goods and then generate it on the GST portal. 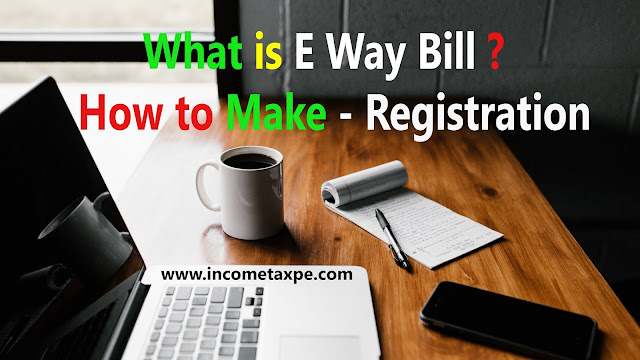 What is GST E Way Bill ?

It is an electronic document generated on the GST portal evidencing or proves of movement of goods. As per Rule-138 of CGST Rule, 2017 every registered person who causes movement of goods of consignment value more than Rs. 50000/- is required to prepare a E-way bill on GST portal and Issued the same Way bill to the transporter or consignee either in electronic form or in hard copy.

But in case where goods sent by a principal located in one state to a job worker located in any other state and in case where handicraft goods transported from one state to another by a person who has been exempted from the requirement of obtaining registration, It shall be generated by the said person irrespective of the value of the consignment.

It has two components , Part-A comprising of details of GSTN of receipiant, place of delivery with PIN code, invoice or challan number and date, value of goods, HSN code, transport document number or Airway bill number bill of lading and reason for transportation; and Part-B comprising of transporter details.

Who is liable to generate E Way bill ?

What is E Way Bill Registration

An e-way bill contains two parts. Where Part-A to be furnished by the person who is causing movement of goods of consignment value exceeding Rs. 50000/- or in two above state special cases,

And Part-B tp be furnished by the person who is transporting the goods.  Where the goods are transported by a registered person whether as consignor or recipiant , the said person shall have to generate the e-way bill by furnishing information in Part-B  on the GST login with their User ID and Passward.

A registered person may obtain an Invoice reference number from the GST portal by uploading on the same, a tax invoice issued by him in FORM GST INV-1 and produce the same for verification by the proper officer ib lieu of tax invoice and such number shall be valid for a period of thirty days from the date of uploading.

In the above case the registered person will not have to upload the information in Part-A of FORM GST EWB-01 for generation of e-way bill  and the same shall be autopapulated by the common portal on the basis of the information furnished in FORM GST INV-1.

Validity and Cancellation of E-way Bill

if under some circumstances of an exceptional nature, the goods cannot be transported within the validity period of the e way bill. In such case the transporter may generate another e-way bill after updating the details in Part-B of FORM GST EWB-01.

Where an e-way bill has been generated under this rule, but goods are either not transported or are not transported as per the details furnished in the e way bill, then the e way bill may be cancelled electronically on the common portal. Cancellation may be either directly or through a facilitation Centre notified by the commissioner, within 24 hours of generation of the e way bill . However, it cannot be cancelled if it has been verified in transit in accordance with the provision of rule 138B of the CGST rules, 2017.

Consequences of non-conformance to it rules:-

If e-way bill, wherever required , are not issued in accordance with the provisions contained in rile 138 of the CGST rules 2017, the same will be considered as contravention of rules. As per section 122 of the CGST Act, 2017, a taxable person who transports any taxable goods without the cover of specified documents shall be liable to a penality of Rs. 10000/- or tax sought to be evaded whichever is greater.

E Way bill used under VAT system are differents in different states as per their different system which made compliance difficult. The E-way bill provision under GST will bring in a uniform rule which will be applicable throughout the country. The physical interface will change way for digital interface under GST system which facilitate faster movement of goods. This system improve the turnaround time of vehicles and help the logistic industry by increasing the average distances travelled, reducing the travel time as well as cost.